The new revolution in Vipassana

Buddha’s revolution is the revelation that there is no self. There is nothing substantial.
Consciousness has no center. There is no reference point. Everything is void. This manifested itself when he stopped striving for perfection and liberation.
Even the desire for freedom proved to be a hindrance, an illusion.
This stopping gave relaxation.

Buddha practiced anything available at his time. It did not give him freedom.
This culminated in a force which only flourished when he gave up and relaxed.
Natural surrender happened and extinguished the ego.
Self-awareness dissolved in totality, from which it never was separated.

So Vipassana meditation arose naturally.
Realizing the true nature of ourselves and life,
the inground of existence.

When vipassana came on my way, I was taught to witness all phenomena.
First, the natural breathing, thinking, feelings and sensations.
Everything is monitored by the witnessing consciousness.
You are not the body, the mind, the emotions, but behold all observations.

“The watcher on the Hill”

Years of sitting and daily witnessing, gave a stillness and depth.
The energy changed and took away the identification with all phenomena. Identification broke.
That which is permanent and real came to the foreground.

The witness, however, indicated a quality of detachment and also of not participation. It stands on the side without participating.
There was realized a lack, which indicated that life should be lived and not just viewed.
Spontaneously the witness changed its position and I became one with the breath. Hereby the ‘I’ disappeared.
It led to involvement and participation without identification. Witnessing became ‘warm’.
the last subtle traces of duality dissolved, when the one who sees and what was seen coincided.

In witnessing there was still a subtle form of duality.
Now coincided with breathing ‘doing’ the witness disappeared.
Fusion with life took place. Emptiness became manifested.
Thus a Tantric form of Vipassana.
Tantric here has the sense of interdependence.
Interwoveness.
Sensual meditation.
Life, consciousness is so intimate with all forms.

It knows no removal nor identification.
This approach brings love and consciousness together.
People living so (Vipassana as a way of life) move not only in the abstract,
but are connected to the body and all phenomena.
Therefore, people who visit these retreats discover love.
This is not an artificial or do-able love, but the direct manifestation of realization.
The merging of the self with all manifests itself as love.
This way you remain in the center of life without attachment and identification.
You died to your old self and life reveals itself as love, suchness and silence.

It is a great revolution of our human potential.
A small shift from watching to merging.
Spirituality has matured and has become human.
Detached intimacy.
No place for spiritual escapism.
All this is the total embodiment of truth and nothing else.
The absolute and relative are one.
Here the focus is not on relaxation or to exercise in attentiveness.
And certainly not about recharging batteries.
Here your potential is manifest.
Awaken.
This happens all by itself with the simple instruction:

Be one with the natural breathing.

You disappear, surrender and you manifest as a Buddha,
as awakened consciousness.
By applying this koan in the energetic field of a Living Buddha,
your essential nature will be easily revealed
and all that does not apparently coincide shows itself first before it disappears.
You disappear to rise as a living and abundant presence. 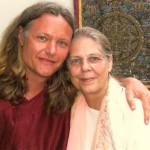