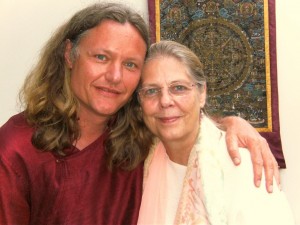 From our first encounter in 1994, I remember the lightness and joy and moreover the love and radiation ShantiMayi was showering.
I received her presence and love and was carried away by it since our first meeting. I was not looking for a master and was satisfied with life.
My previous master passed away some years before but was still so alive in my heart.
And yet this encounter made me again aware of a higher possibility and of some shadows and knots in my heart.
They were mainly expressions of selfishness and arrogance, limiting and obscuring my essence. I needed to learn what sincerity was.
What it was to be completely honest and humble.
I did not know what unconditional love was. In spite of satoris and insights, I was not free and fearless.
Intuitively I knew that by being with ShantiMayi these shadows could dissolve.
As a magnet I was pulled to her, and as a young father I did everything to be as much in her presence as possible.
My wife Tara, the kids and I traveled to India, France, Denmark and other places as much as possible just to be with ShantiMayi.
I also enclosed the diamond of the Gayatri Mantra in my heart. Until today this mantra is serving me and others so well.
It has become part of my heartbeat and bloodstream.
I did not have a psychological need to be with ShantiMayi. There was not much longing for personal attention and private conversations.
Something much deeper was breeding. The main Sadhana has been simply absorbing the Presence.
Listening with the heart to the heart of the master. From where does she speak? Entering that mysterious place.
Melting the heart and disappearing into the space, into Oneness.
Wanting nothing, resting in love as love. And love itself revealed everything.
All fears and hidden pains were exposed and burned in this process in the midst of everyday and family life.
Since most of the time I was practically not able to live in the physical presence of ShantiMayi, this whole process of meeting and melting in the heart of the master became internal.
Even with distance and time, I no longer had objections.
I could merge with the essence of ShantiMayi from any place since her presence and love lived so vividly in my heart.
Deeper and deeper the realization grew that the essence of ShantiMayi and I are the same and one, and every appearance of separation is only in the outer.
We hardly had appointments or personal contact. I hardly had questions to ask or was asking for guidance in a practical sense, but everything was received.
Being receptive has been and still is such a precious quality. Our language is spoken in impersonal silence or in one word, Love.
In this deep resonance all shadows and knots were consumed and Faith grew. Life in the world was continuing and was never an excuse for this.
It was the practical working field. I was enriched by it. It was always the real test-case.
Family and living in society has always been in support of awakening and yes, of course, also a good challenge.
Practical life shows the embodiment of the real state of affairs.
Spiritual practice like Dhyana, Gayatri recitation and Guru yoga served me so well. Every aspect of life did in fact!
This has been such a revelation; not only the dedication to Sacha served and supported me, but all aspects of life has been in support of realization.
No matter what it was, pleasant or painful, all of life has been Guru. Actually all of life is also Sacha.
This insight has been giving so much freedom and expansion, and it finally led me to give up any structure or discipline.
It simply felt finished as it no longer served. There was no striving or longing anymore, but a deep resting in what is, with the sense that everything is well.
No more need for recognition or becoming anything. No more need for changing anything. Life became so spontaneous and simple, and yet deeper than ever before.

In January 2002 I visited Sacha Dham again. A vipassana intensive was in progress.
I joined the sittings and plugged in naturally, but the structure of vipassana was no longer supportive of the witnessing quality of awareness.
That which I am could not be structured anymore. The silence was not controlled or constructed and it could not be disturbed by anything.
Also, during the night the merging with existence went on spontaneously.
During one of these nights, while sitting and observing breathing, I could not distinguish the difference between in and out breath until the breath eventually disappeared.
Just presence, no thinking, empty mind.
Deeper this presence was pulled into annihilation. Then fear arose. The fear of death appeared and I knew this fear so well.
So often this irrational fear emerged when I came on the threshold of God. It did not come from the mind. There was no thinking.
It was an overwhelming energy. This fear prevented the great surrender in Nothingness. This fear had a great power and had been pulling me back many times before.
Within me arose a strength and determination to no longer be dominated by this power.
I called for support with all my strength to surpass this fear. Sacha Baba appeared at my Sankulp.
He pulled me through the fear and with it the last sense of “I” disappeared.
Here in No-man’s land, from pre-existence a light started rising. This light is love itself in its purest form. This light was expanding and showered me with gratefulness.
Sacha Baba initiated me by placing an egg shaped crown on top of my head. I knew by this gesture I would forever be protected and guided by the divine.
My gratitude was expressed by tears since my life’s heart desire was fulfilled. The unbelievable had taken place.
This realization, this initiation into the selfless nature of existence was not expressed in words afterwards.
I did not carry it around. It carried me.

Who could have done so?
I did not talk to people about it.
It lived me. Life in its outer form continued not much different than before. This shift in consciousness took years to settle, to be embodied and integrated.
The body was greatly affected and so was sleep. The revelation of emptiness was crystallizing in all the cells.
After this took place- though it is still continuing, but has become more subtle, the experience of “the rising sun” emerged.
Gradually the sun started rising and shining from the depth of receptivity into an active force. This was creativity and love wanting to express itself.
One can have great teachings, but this is what is really offered. This belongs to no-one and therefore to anyone.
Perhaps 5 years later I heard myself giving expression to this initiation. I also started noticing ’spontaneous effects’ in people I met.
I started verbally expressing myself to ShantiMayi and others. ShantiMayi at first had told me to remain quiet, and some time later encouraged me to offer satsang.
Initially there was no drive but I remained open for the possibility.
In 2008 while visiting Sacha Dham, ShantiMayi asked me again to give satsang and I heard myself saying “Yes, I will serve.”
Since then many people are coming and blossoming. Just as the expansion continues endlessly, people are coming and are so willing to receive Sacha’s grace.
Love makes so much possible. Life is so precious. Sacha is so unlimited and ShantiMayi is so generously offering herself to everyone.
Now we know our hearts are not the same, but one.
And whenever we meet in the physical realm or even somewhere else our Oneness becomes expanded.
It’s our heart that bursts out of love, ready to live and fly in the mysterious unknown. The Fusion of Zen and Tantra